“We will either find a way or make one.” (Hannibal)

Maybe you have signed this declaration. What next? “What can I do?” is the question that keeps coming up. Many people want to get engaged, aside from the many who are already engaged. Where to begin?

The first note below has been prepared to answer the question, by tabulating the wide variety of activities that are already underway, as well as some others that could be. The second note elaborates on the sequence of steps that can take us from declaration to reformation.

Note I. The Next Step: engagement

In addition to “What can I do?”  is “What can we do, in our communities, associations, businesses, and governments?“ The table below organizes some answers in three groups: reframing our beliefs, in order to reverse what is wrong, and renew what can be made right. Click on any box to see some of the possibilities. But let yourself go beyond these boxes because a simple new idea can change the world… And please share your ideas on #ourinterdependence.

Whatever you do, keep in mind that this is not just about taking action. It is also about consolidating the actions we take around a common cause, a shared purpose. A clear focus of attention is required to fuse all kinds of activities into a movement for reformative change. We take its purpose to be the restoration of balance in our societies. 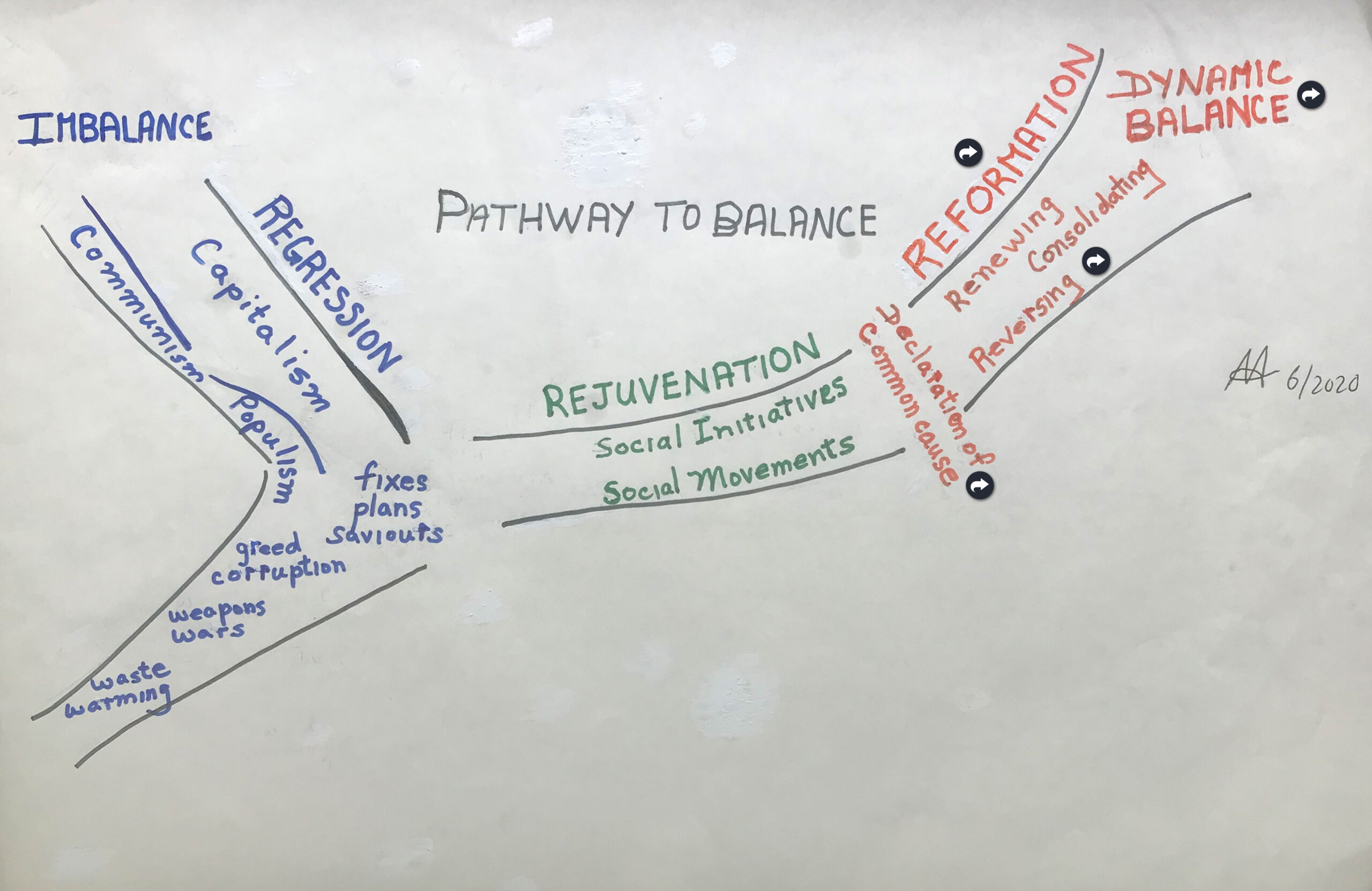 Note II. The Steps from Declaration to Reformation

Faced with a crescendo of crises—from climate change to the decline of democracy—we require nothing less than reformation, on a global scale. If imbalance is the problem, then the restoration of balance will have to be the solution, across the three sectors of society—public governments that are respected and private businesses that are responsible buttressed by plural communities that are robust.

How to get from declaration to reformation, from words on a screen to actions on the ground? Consider the Reformation.

The 16th Century Reformation
What we call the Reformation began with words on the door of a church that were carried to a major realignment of power in Europe. In the Germany of 1517, with widespread outrage over corruption in the dominating religion, an obscure monk named Martin Luther challenged its prevailing authority by nailing a list of 95 theses (most of them grievances) to the door of a church. This became the spark that ignited the Reformation. These words spread within weeks, thanks to the new social medium of the time, the printing press. A groundswell followed as people organized in their communities to confront the corruption. New institutions formed and some existing ones reformed. The world changed.

That was Europe five centuries ago, about the corruption of one institution. Today we face corruption across many institutions, worldwide. Does this make global reformation impossible? Well, the devastating effects of climate change are not only possible, but existent. And another great war—likely the last—is possible too, with so many despots having access to nuclear weapons. When circumstances become dire, the impossible can become possible, indeed necessary. Must we wait for that?

Starting on the ground, not at the “top”
Does this kind of change emanate from the “top“, namely the authorities of established institutions, whether in government or business? The preferred solutions today include electing heroic leaders, holding elite conferences, and fixing capitalism. None of these is working.

The record of heroic leadership is hardly stellar. Much of it has descended into demagoguery, some of it has not risen above impotence. When will we have had enough of this leadership? The grand conferences on global warming, where the elite meet amidst the media hype, seem to have had the net effect of generating a bit more of that warming. (Some of these “leaders”, pushed to do something back home, use their four-year mandates to make fifty-year plans. Why do we tolerate such nonsense?) As for the fixes of what can be called adjectival capitalism—Progressive Capitalism, Caring Capitalism, Inclusive Capitalism, and more, even Democratic Capitalism (democracy being the adjective)—it is our societies that need fixing, thanks to the damage caused by the hegemony of capitalism.

So much for the top. How about the bottom? Franklin Delano Roosevelt, when asked by an activist to use the authority of his office to champion a particular change, replied: “I agree with you. I want to do it. Now go out and make me do it.” The message is that the reforming of our established institutions may be the last step in reformation, not the first.

Pathway to Reformation
Consider these steps to reformation:
Declaration for direction > Reframing of beliefs > Reversing wrongs and Renewing rights > Consolidating all this activity > Reforming our institutions

Luther’s declaration on that church door established a common cause that galvanized people into taking action. With a clear explanation of what was happening in high places, people on the ground screwed up the courage to confront it. In other words, the path to reformation is opened by the reframing of what we believe, or have been made to believe, so that we can appreciate what is wrong and take action to make it right.

If we believe that change must come from the top, then most of us sit around waiting for it to happen. If we believe that the wealth of globalization trickles down to everyone, then we take what we get. If we believe that democracy is about swinging between left right, then we will not see the plural sector for the role it must play in buttressing the power of the public and private sectors.

With our beliefs reframed, we can see the path to constructive action, (as shown in the table) ranging from reversing the dogma of economics (greed is good, markets are sacred, governments are suspect) and creating social enterprises not tethered to the stock market, all the way to establishing a Peace Council to renew global government.

Consolidating the Activities
We need as much constructive reversing and renewing as we can get. And we are getting a great deal of it—more than ever before. By one estimate, a million social activities are blooming—for social justice, sustainable environment, world peace, reformed education, better food, and so much more.
Yet the more of this we get, the greater grows the imbalance. Reformation may be on its way, but its path will be blocked so long as the forces for imbalance work together while those for balance do not.

Global reformation will thus require the consolidation of the ongoing activities into a cohesive movement that can drive the reform of our institutions. Variety is good, so long as it pursues common cause. Because Luther’s theses focussed attention on a cause, its message spread quickly, through the new social medium of the time, the printing press. Imagine what the new social media of our time can do with the purpose of rebalancing society.

We have a choice, between global devastation and grounded reformation. We can continue to plunder this planet, or we can find and make a way to preserve it. The new globalization begins here…

Please use #ourinterdependence when sharing!